Stephanie works in close partnership with the Board to implement the Foundation’s goals and deepen its impact. As the Director, she oversees all aspects of the Foundation, including its strategy, operations, development, and grantmaking. She previously served as Associate Director at the Jewish Women’s Foundation of New York (JWFNY), where she oversaw 3.2 million in grants to 137 programs in 21 countries. She played an instrumental role in strengthening the grantmaking practices, growing and engaging their donor base, and creating impactful education programming.

Prior to working at JWFNY, Stephanie was a Communications and Development Associate for Institute for Children, Poverty, and Homelessness (ICPH), a national thinktank on family poverty and homelessness. She also has experience with the New York City Administration for Children’s Services as the Special Assistant to the Commissioner.

Stephanie was selected as one of The Jewish Week’s 36 Under 36 in 2020 and she was awarded the 2019 Nancy Schwartz Sternoff z”l Leadership Award from JWFNY.  She is a Board Member of Women Creating Change, has previously served as a Young Leader at Philanthropy NY, and was a Community Connections Fellow at the Jewish Community Relations Council of New York. Stephanie received her BS from Vanderbilt University and her MS from NYU Steinhardt School. She lives in Northern New Jersey with her husband Greg and children Zach and Sasha. 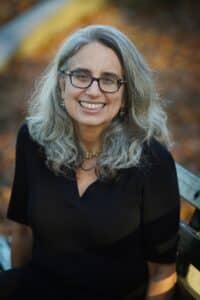 Julie was hired in November 2022 to help expand the Foundation’s impact and raise its profile in the Jewish philanthropic community. In close partnership with Stephanie and the Board, Julie oversees communications and works in a variety of other areas, including serving as a resource to the Foundation’s grantees and prospective grantees.

Before joining the Foundation, Julie was Communications Director at Jewish Funders Network, where she planned and implemented all aspects of its communications, including newsletters,  the website, social media, thought leadership, and marketing for its annual conference. While at JFN, Julie edited and oversaw the publication of comprehensive guidebooks on impact investing and participatory grantmaking. She also created the organization’s first-ever membership handbook, doubled its newsletter readership and helped launch both CANVAS, a Jewish arts and culture funding collaborative incubated at JFN, and GrantED, a project strengthening relationships between grantmakers and grantseekers in the Jewish community.

A longtime journalist, primarily at Jewish publications, Julie was managing editor of My Jewish Learning, online editor at the Jewish Telegraphic Agency, and associate editor at The New York Jewish Week, where she reported on education and wrote “In the Mix,” a column and blog about intermarried life. A graduate of Oberlin College, she lives in Jackson Heights, Queens with her husband and two daughters. She enjoys reading and writing fiction, exploring New York City on her bike, cooking, solving crossword puzzles, and trying to improve her Hebrew.